The Rock ‘n’ Roll Las Vegas half marathon weekend recap is a week overdue, but here it is! Although only 50% in this post.

I’ve decided to separate my weekend recap into two parts to capture the two days prior to the race day involving fun (maybe too much fun??) and a separate post specifically on the race and my post-race thoughts.

So much happened over the weekend from food adventures to hanging out with great friends, exploring the Las Vegas strip, a little gambling here and there, lots of beer drinking, and then the actual race itself — a race that did not turn out at all how I anticipated.

And, while there is an element of my own personal surprise to how the race ended up, recapping all that happened during the weekend in my mind and on this post just goes to show how so many of the environmental and experiential factors contributed to the poor performance.

Recapping pre-RNR Vegas with many fabulous pics snapped on my phone. Sorry if any of them are blurry. 😉

The majority of my wardrobe to Vegas was, not surprisingly, comprised of my beloved Oiselle apparel. I brought my team singlet, violet arm warmers, a couple of Stripeys, Trials Hoodie, Lesley Knickers, Rogas, Bum Wrap, Mesh Tank, a few tees, Runfinity Scarves, ummm……….. yeah, clearly my luggage was filled with plenty of goodies to get me by on a 3-night trip. This was on top of other going-out clothing. I have a FOMO problem when it comes to packing for vacations. 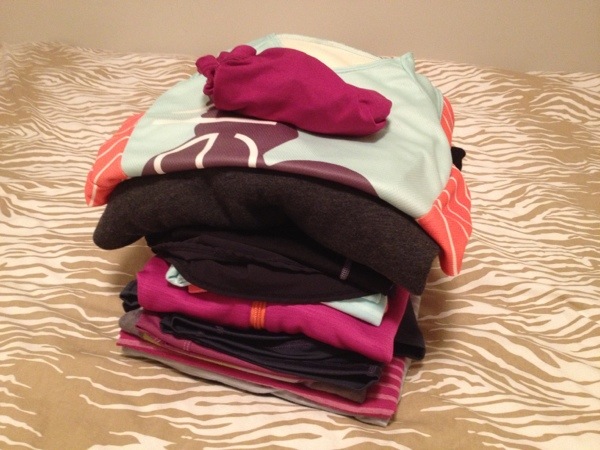 Comfy Outfit for the Flight

For the flight, I decided on complete comfort so I donned my Mac Jacket, Lesley Running Tight, and Runfinity Scarf in Sky. Beneath the jacket, I wore my Start Line Tee. Fashion and comfort all combined into one great air travel outfit. 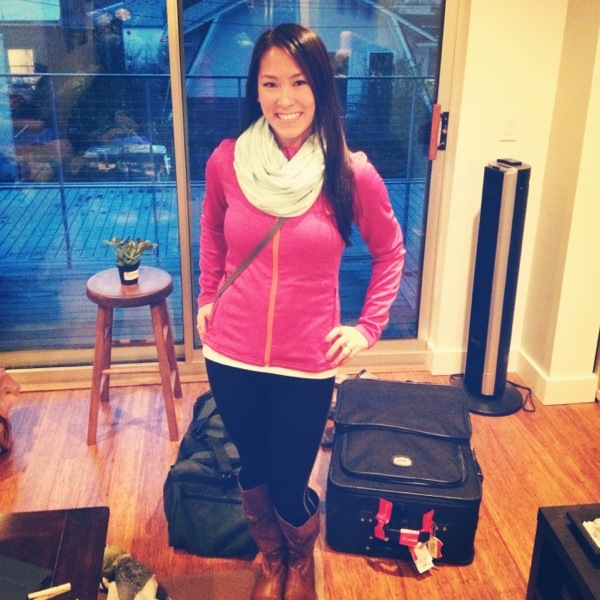 Flying in the Sky to Sin City…

Thumbs up for flying to Vegas and rockin’ the Runfinity love.

Thank you, Southwest, for carbing me up with plenty of Cheese Nips and a Coors Light. Oh, and those peanuts. 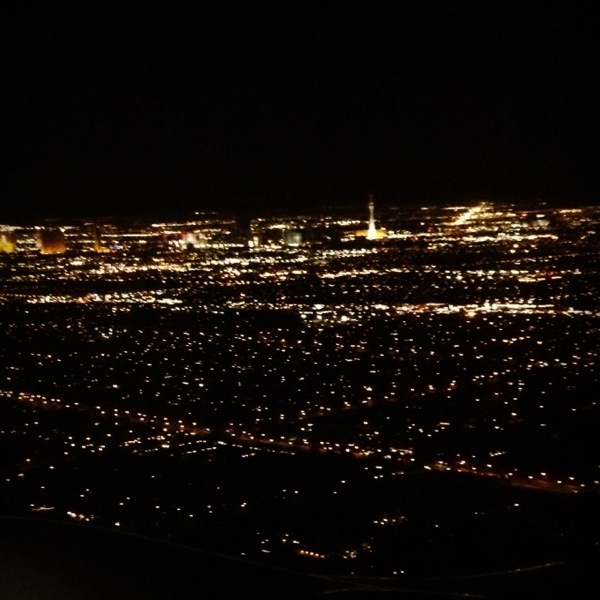 We arrived to our hotel, the Vdara, and were very impressed by the property and our rooms. Love that this suite including our own separate living room, dining area, and a gorgeous bedding and bathroom section. Love when hotels have nice stand-up showers and a separate bathtub, even though I never take baths. Absolutely gorgeous! 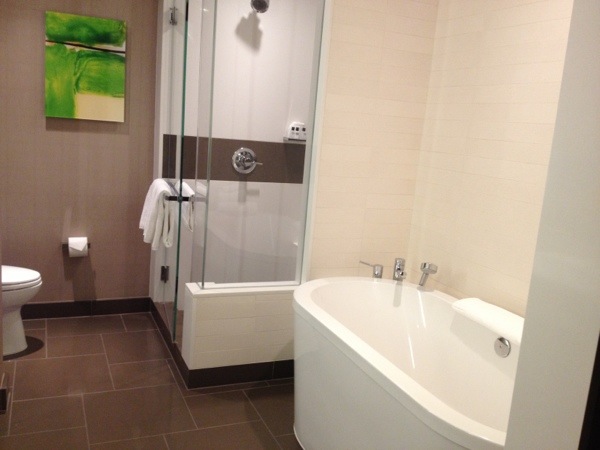 We quickly got ready to head out to dinner. Of course, I wanted to snap a quick picture of myself. I swear – I was the only girl in Vegas wearing jeans and not in a hoochie dress.

Our good couple friends, Sarah and James, had accompanies us to Las Vegas and were staying at the same hotel. We decided that our first night in Vegas called for an amazing meal at Wolfgang Puck’s Cut Steakhouse at the Palazzo Hotel on the Strip. Eater Vegas voted this the Restaurant of the Year and, as Sarah’s friend said she loved the place, we just had to try it.

Check out this fancy ordering process specifically for beverages. The iPad contained the complete wine, cocktail, and beer menu and all you need to do is select the drinks, add to the order, and the waitstaff arrive moments later. Wow. Is this the future of the restaurant industry? Very cool.

I had the Show Me Love cocktail but can’t recall what all was in it. We started off with a shared appetizer of Maryland Blue Crab & Carolina Shrimp “Louis” Cocktail, Spicy Tomato-Horseradish. I really loved it; Joe isn’t a fan of onions so he didn’t love. More for me! 🙂

Being that I’m not a big red meat-eater (though every so often I do crave a juicy burger), I decided to go with the 2-lb Pan-Roasted Maine Lobster with Black Truffle Sabayon. Umm, let me tell you that this was so decadent and rich.

A waiter came and cracked open the lobster and removed all of the meat for me. While the menu called it a 2-pounder, it was really more like a cup of lobster. Yum.

On the side, we had Yukon Gold Potato Puree (by my request, our group needed to order mashed potatoes or else!) and Roasted Brussels Sprouts with Smoky Bacon and Pearl Onions. Happy tummy. We declined dessert as we were all stuffed by the end, but they still brought out some complimentary mini lemon bars and chocolate bars. So delicious.

If you’re in Vegas, I would highly recommend the dining experience here. The staff is SO attentive, the food delicious, and they serve you tons and tons of complimentary breads/carbs before the meal even begins. That’s my kind of restaurant. 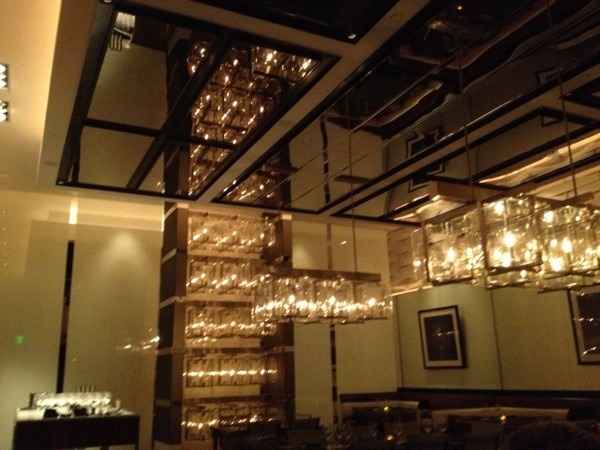 The interior of the Palazzo was total Winter Wonderland, as were many of the other hotels. I loved it.

Snap of the Venetian on our way back to the hotel.

Day 2: Starting Off with Room Service

Our morning started off with room service in the form of fresh brewed illy coffee, toasted bagels, and these really delicious potato bites.

The service at the Vdara was so nice. Just because the room service person forgot to bring us creamer for our coffee, he arrived moments later with complimentary chocolate-dipped strawberries! Umm, can I get this type of service at every hotel, please?

On our way we went in search of real brunch.

While I didn’t get to try this place, the chocolate fountains and waterfalls made my mouth water. So whimsical. 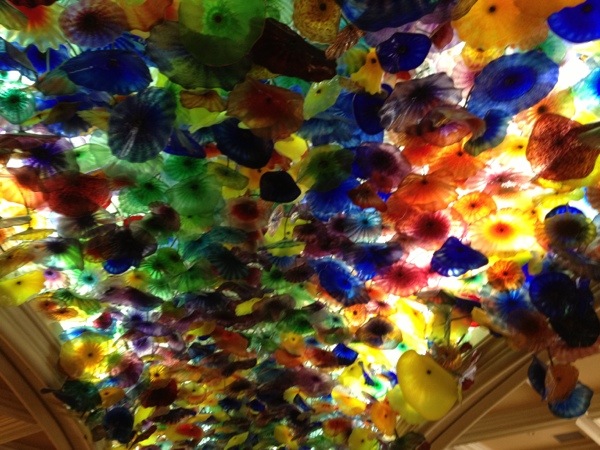 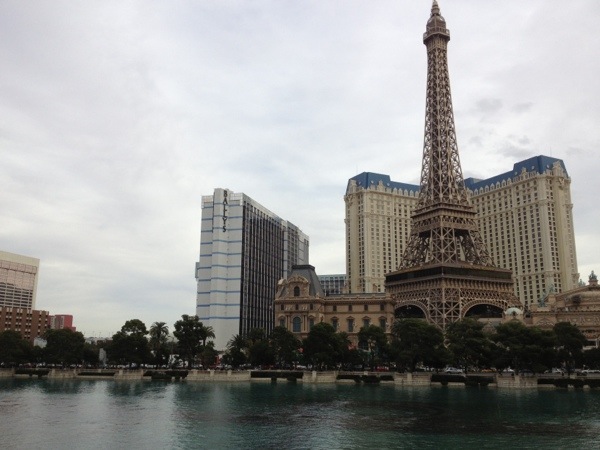 Just our luck, as we were walking by the Bellagio fountains, the fountain show began. Their shows occur every half hour and loads of crowds form just to watch it.

I had never seen it during the daytime so I found it very cool.

Joe was also in awe… 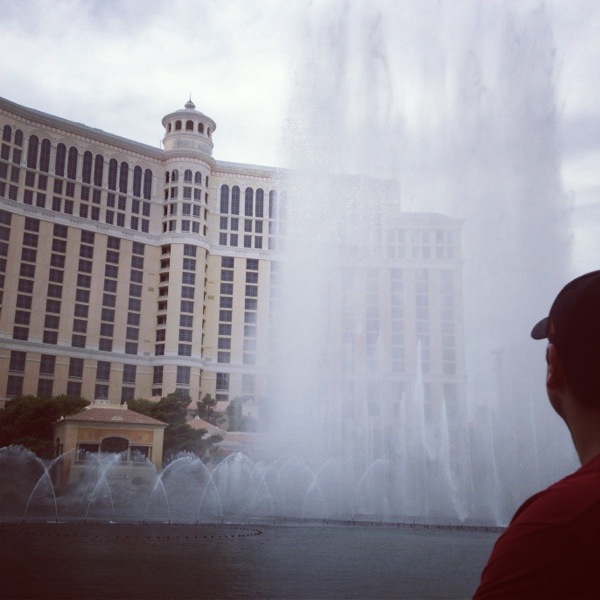 After the water show, we finally made it over to the Max Brenner Chocolate by the Bald Man, located at the Forum Shops at Caesar’s Palace, based on awesome Yelp reviews. This place was like chocolate heaven. 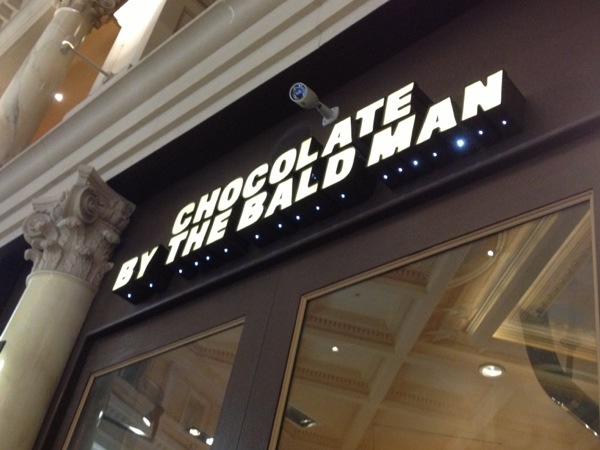 Everything had a chocolate twist to it, including most of the brunch items. I like the slogan they have on their menu. Good words to live by.

While I didn’t get the First Time Bagel, I was dying to see what this concoction looks like. A melted chocolate bar inside a bagel!? Wow. 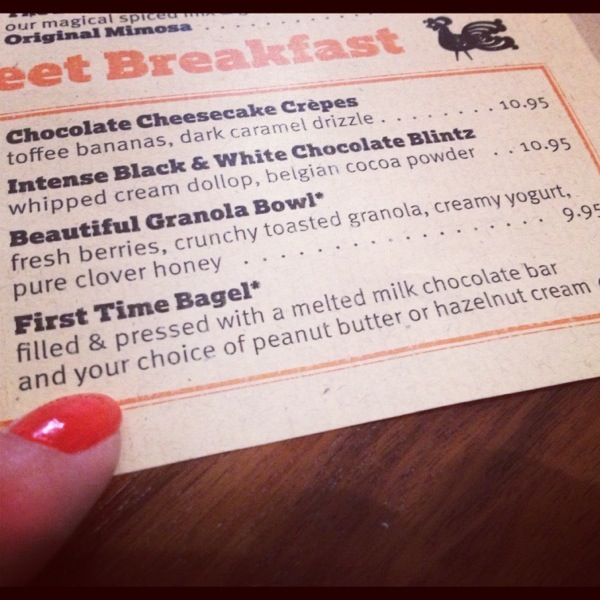 Instead, I got a scramble with some mushrooms and bacon. You see that little cup filled with something brown?

Yes, this was a little chocolate lick. And, yes, I dipped my eggs and potatoes into it.

The two best friends that I’ve known the longest ever, Becky and Christy – we’ve been besties since 6th grade! How the years fly by. They love to run and race and were here for the RNR Vegas half as well.

After milling around the shops, we finally decided to head over to the RNR race expo.

Note for RNR runners: if you ever find yourself without your printed confirmation sheet, don’t fret. They have everyone’s race numbers posted and readily available. Your bib number is necessary to pick up your packet.

Upon reviewing many, many restaurant reviews on Yelp, I surveyed the group and decided to hit up SUSHISAMBA, also located the Palazzo like Cut Steakhouse.

The place had a great atmosphere and the food that we ordered… I enjoyed. Not everyone in our group fully enjoyed the dining experience, but the items that Joe and I ordered were good. 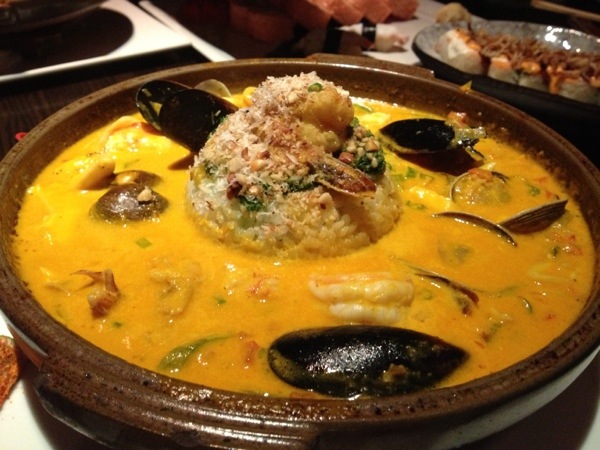 With my love. 🙂 Wearing a glittery sequined top that I had found at Nordstrom Rack.

After dinner, we headed over to Public House which had one of the most extensive beer lists that I’ve seen. The ambience was also very cool.

A yummy Joseph James Craft American Lager for me.

Then, because we were in Vegas, Sarah, James, Joe and I went out into the late hours. Earlier in the day, we ran into a club promoter who got us VIP into Surrender Nightclub (note: if you click to their website, music auto-plays) located at the Encore Hotel.

This place was amazing! Played some blackjack and craps, had some beers, and then ended the night at… hmm, 3am? 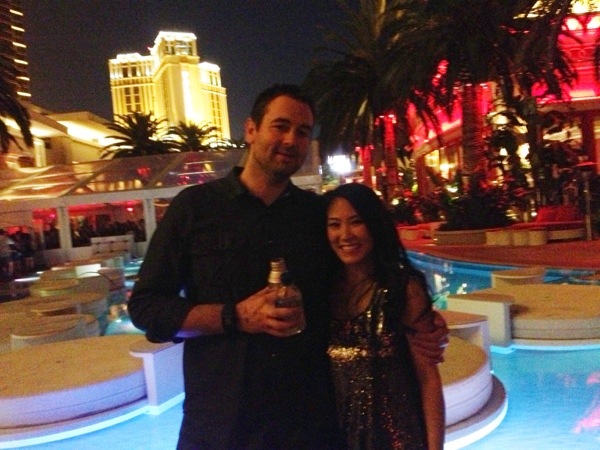 The first two days in Vegas were so incredibly fun! But, was it conducive to another half marathon the next day? And only one week after running the Seattle Half?

I’ll tell you more in part 2 of this race weekend recap.