Today, I ran. It’s been a little over a week and a half since I’ve run, and I’ve really been itching to.

The awful fall from the Rock ‘n’ Roll San Diego full marathon sidelined me for a total of 11 days. These 11 days weren’t so bad, really. I rested, ate, and rested some more.

After 5+ months of intense, strict running regimen I really felt at a loss as to what I’d do without running. Luckily, I think the rest has done some good more than just to let my wounded knees heal.

Tonight after work my fiancé Joe and I decided to immediately change into our workout clothes and hit the road. To help with my well-rested legs I decided to rock my purple Zensah compression leg sleeves. They aid in both shin and calf support in addition to stimulating oxygen blood flow through the muscles. 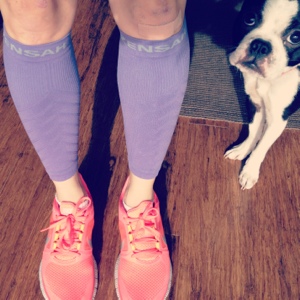 Tonight I ran an easy, slow-paced 3-miler from Eastlake onto the Burke-Gilman Trail as an out and back. The heat got me to me as I felt SUPER sweaty, breathed hard, and just felt like I had less endurance than before.

However, I have faith that I’ll still be able to give it my all at next Saturday’s Rock ‘n’ Roll Seattle half marathon. Another race, yep! 🙂 Not confident that I’ll beat my PR that I set just last month at the Rock ‘n’ Roll Portland half marathon (1:45:55) but you know what? It’s okay!!

After the run tonight we decided to take the pup to Magnuson Park’s off-leash dog park. Lola absolutely loves it. She has such long legs and is such a fast pup. Have you ever seen a little Boston chasing a ball? Seriously so cute.

On the way home, we were pretty tired and famished. Blue C Sushi to the rescue! They specialize in Kaiten Sushi (conveyor belt sushi) and had an awesome takeout station setup. It was my first time eating their sushi, though I’ve had sake bombs there before. Hmm… opposite?

I basically loaded up a few plates into the takeout containers and brought a stack of empty colored plates to the cashier. There’s certain colors on the plates which signify different price points from $2-$5.50.

I may have gone a little overboard with the amount of food I brought home. I think the total was $22 for all of the food below: 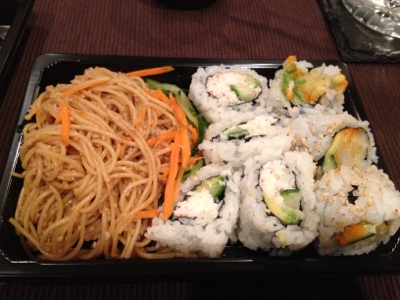 Tomorrow’s going to be SUCH a long day! Fremont Solstice Festival = day drinking and a parade filled with naked bike riders. Seriously! This is what happens in Seattle once a year.

I have a full tummy right now and off to relax with my man and pup. Will leave you with this picture, makes me smile. 🙂