I had the best birthday weekend in Vancouver, BC a couple of weekends ago. Ringing in the last year of my twenties in my favorite city started off the year with a big bang.

My birthday morning started off with a wonderful surprise – a sweet card and a gift in a nice, blue box containing a beautiful infinity bracelet. Love.

After going to work for the day, we packed up and headed out on a road trip up north through the Canadian border. By the time we got to Vancouver, it was late and we were ready to eat.

We stayed at the Hyatt in Vancouver and absolutely loved it. My favorite hotel in Vancouver is The Loden which is near the waterfront and the Olympic torch. It’s more of boutique hotel whereas the Hyatt was large, filled with amenities, and nicely situated in the middle of the shopping area.

For dinner, we headed over to one of my favorite restaurants, Boneta, located in the Gastown neighborhood. If you’re ever visiting the city, I highly recommend Boneta for fabulous drinks and food. 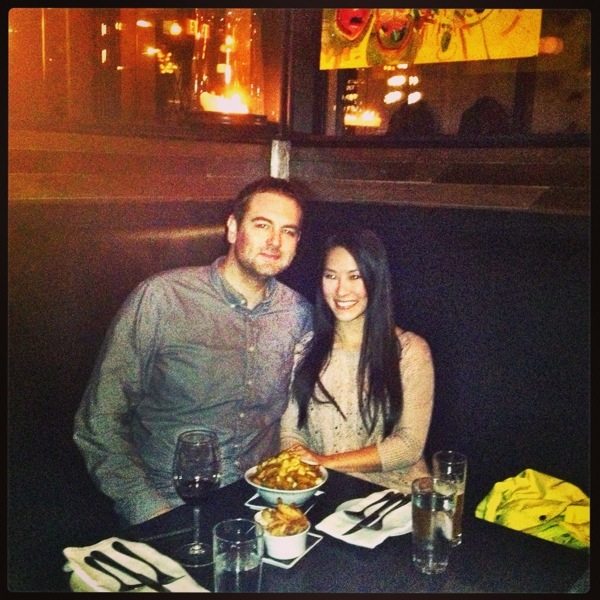 For food, I definitely suggest their deliciously rich poutine (French fries with cheese curds and heavy), and octopus chips. I swear the octopus chips are delicious!! 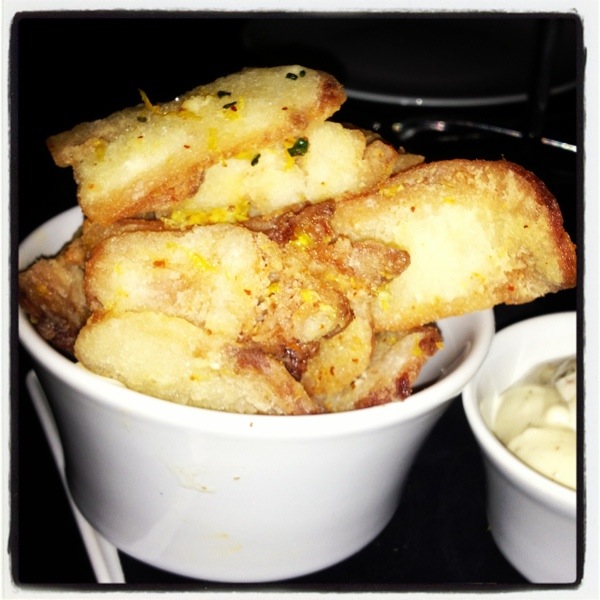 After enjoying some drinks and eats at Boneta, we walked a little bit down to the edge of Gastown to The Alibi Room which had great reviews on Yelp for its great selection of beer. They were preparing for a special beer week festival that started a few days later, so their selection was “limited” for draft beers. Umm. This was quite a selection and satisfied my love for IPAs. Well done, Alibi Room. 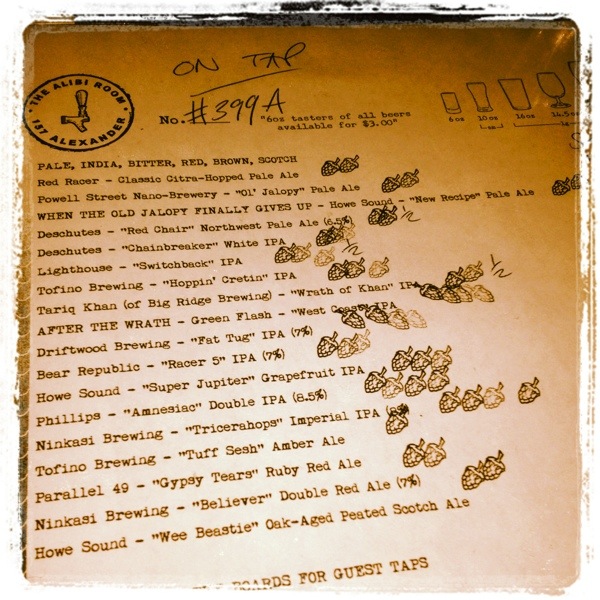 We retired back to the Hyatt soon after having some beer and a delicious molten chocolate cake. Yum.

The next morning, we slept in some and woke up to a sunny downtown Vancouver.

We started off our day with a fantastic 7 mile run along the Vancouver waterfront sea wall through to Stanley Park. Stanley Park holds a very special place in my heart as we got engaged there last May. The running path is quite possibly my favorite one I’ve ever run on. All of the runners, walkers, bikers, etc. are very courteous to each other, the scenery is beautiful, and it’s just a well-paved route. 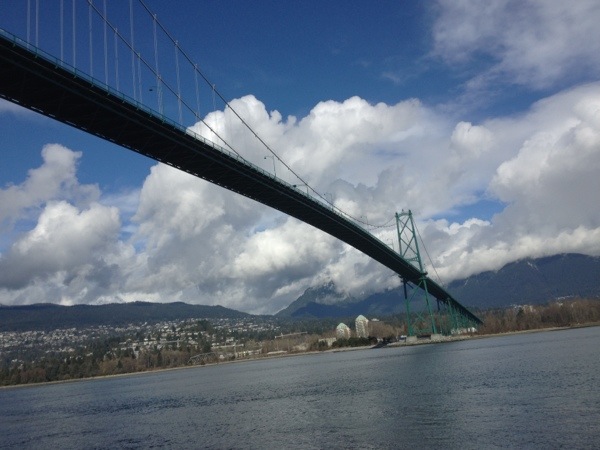 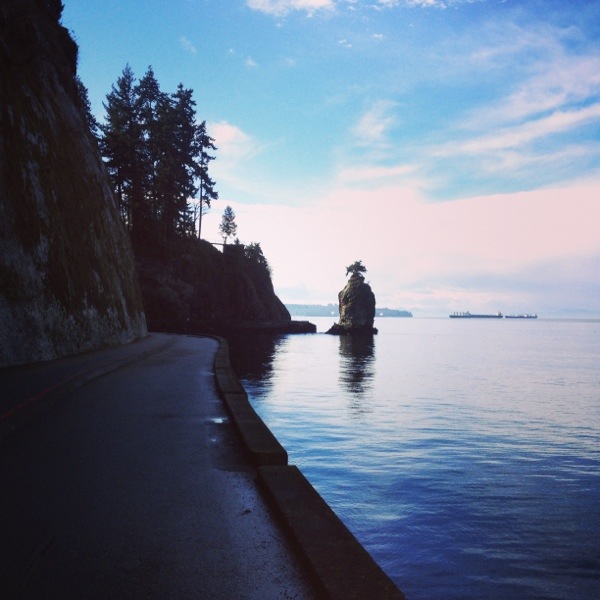 The new Oiselle Lux Layer has become one of my very favorite running tops. The above is in the Heather Ribbon color. It’s definitely a lux, velvety fabric with plenty of moisture wicking superpowers. And thumbholes!! Can’t forget that. That, coupled with the Oiselle Lesley Knickers made for the perfect running outfit. 50 degrees or so was perfect, but I did get a little bit warm and has to roll up the sleeves.

After completing this fantastic run, Joe and I freshened up and made our way over to Meat & Bread, another one of our favorite eateries in Vancouver. We first heard of Meat & Bread from watching Diners, Drive-Ins & Dives featuring Vancouver. Trust me, though, this place is not any of the D’s. Here’s a link to the YouTube video episode.

They’re famous for their Porchetta sandwich with salsa verde. We had to try it this time as the last time we were there they had run out of the Porchetta meat. 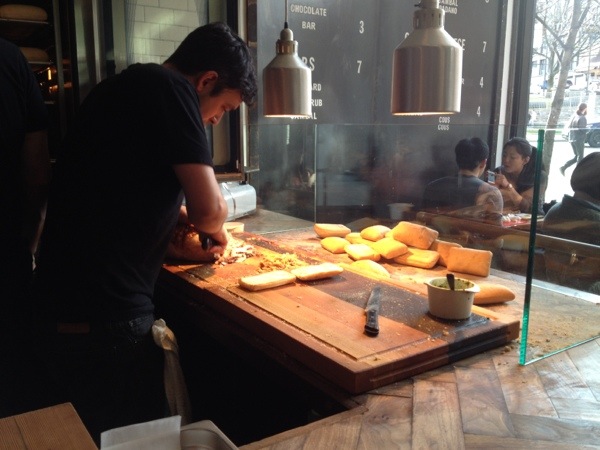 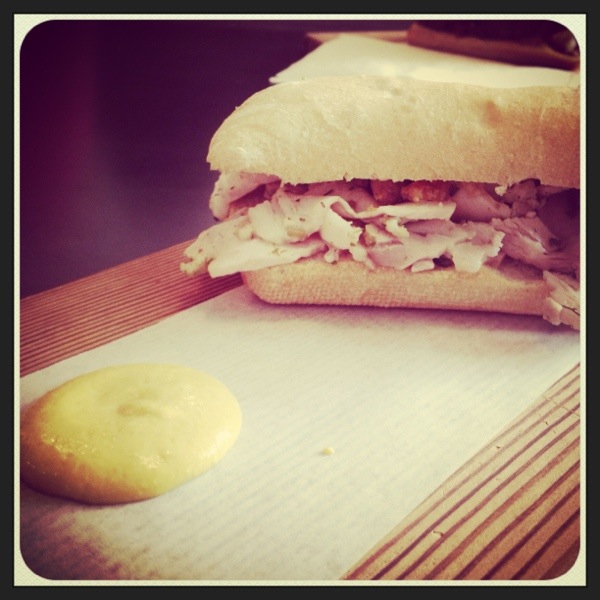 The Porchetta sandwich was delicious! Though, personally, my favorite is their meatball sandwich and grilled cheese. Try anything there – you won’t regret it.

While out and about in the Gastown area, we decided to try one of the oldest bars in Vancouver — the Lamplighters Public House which opened up in 1899 in the Gastown neighborhood.

I enjoyed a sidecar and good ol’ beer. 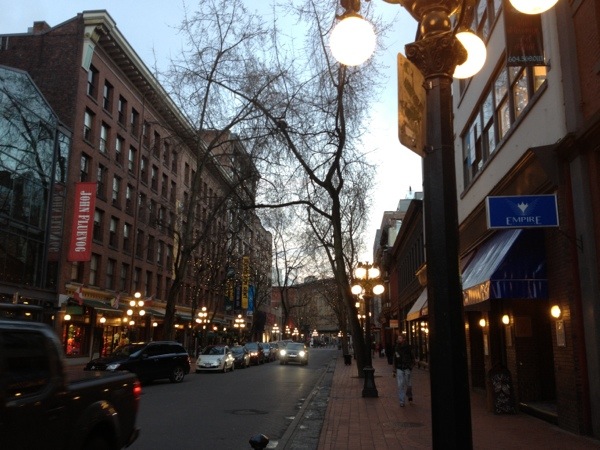 I couldn’t get too full, though. We had a special day-after-birthday dinner to attend! I’ve wanted to try the world-famous Indian restaurant Vij’s. Check out their reviews on Yelp and other publications. The hype is real! I can vouch for this.

They don’t take reservations, but we arrived around 8pm and was assured that we would be served dinner that night. The entire restaurant was filled and there were people enjoying drinks in their bar/waiting area. The owner, Vikram Vij, was extremely nice and accommodating and offered us a suggestion of waiting with a drink or going down the street to enjoy a cocktail while we waited, which we took him up on.

After enjoying a delicious Delirium Tremens beer at the other place (forgot what it was called), we came back to Vij’s at 9:15 to see if a table was ready. I kid you not – this place is busy at all times. It didn’t slow down, but we never felt crowded or rushed at all.

We enjoyed a glass of wine and was happy to see that we were served a complimentary selection of appetizers in the waiting area. Seriously, what restaurant does that? Amazing customer service and food right off the bat. 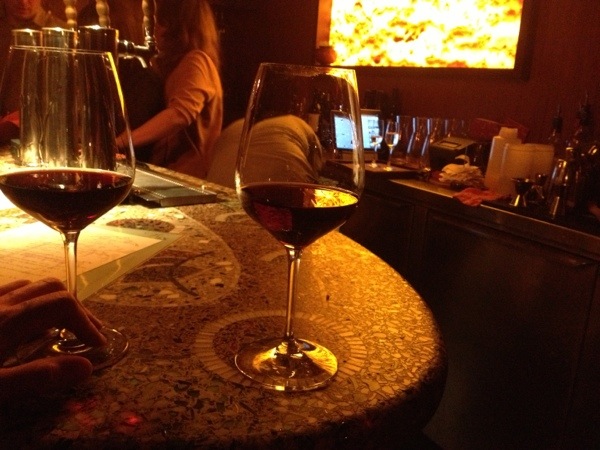 Every dish that we enjoyed during dinner was superb. We had the curried chickpea/sweet potato “cookies” as an appetizer which were great, very flavorful.

Even though we were full, we had to try their rice pudding with edible silver specks on top. UMM. Yum. I’ve never been a big fan of rice pudding or pudding in general, but this was so tasty. I wanted to lick the bowl.

Overall, we found the service to be spot on – very attentive, friendly, and helpful. They also made sure that every group made it into dine despite it getting late. The 2 hour wait to eat dinner at Vij’s was well worth it. Having tried both Shanik, the new sister restaurant in Seattle, and the original Vij’s, Vij’s wins hands down.

Sunday morning, it was time to check out and explore the city one last time before heading back to Seattle. The weather wasn’t as nice as Saturday, but luckily the rain stayed away. Ominous clouds shadowing the Vancouver waterfront, though.

We came back to Stanley Park that morning to pay a visit to the exact bench where we got engaged in May 2012. 🙂 Love.

We also took some time to stroll around Stanley Park and made it to this cool lighthouse.

Hunger soon called and we headed over to Cafe Medina which is highly rated for their amazing brunch. We had tried to eat brunch there at one point on a weekday but they had switched to their lunch menu.

This did not disappoint. We shared a small waffle with salted caramel sauce. Seriously, one of the best waffles and lattes I’ve ever had. It was good all around. For brunch entree, I had the Cassoulet which had eggs, baked beans, bacon, and sausage. Yum. 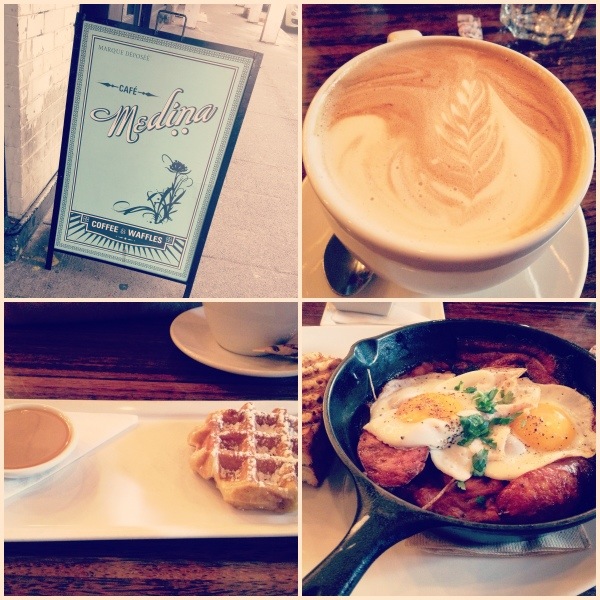 After our wonderful brunch, we had one last stop to make: Granville Island Market. Love going here. If you enjoy farmers market type environments, this is the ultimate. From fresh veggies and fruits to meats, cheese, pasta, and desserts, this place has it. It has a cool toy shop, brewery, and more.

We picked up a bottle of one of our favorite salad dressings made in Kelowna, BC – Little Creek Dressing – Okanagan’s Original Vinaigrette. You can also check out their site here.

And I scored some awesome bird earrings from a local vendor June Hunter Designs that specializes in her own unique photography, fine art, and custom jewelry. Love!

This was a fantastic weekend to celebrate my birthday. Thank you so much, Joe, for such a great celebration.

On our way back to Seattle, we stopped at Joe’s parents’ house to pick up Lola. She, of course, was wiped out as always after a visit to the grandparents. 🙂

One thought on “Birthday Weekend in Vancouver 2013”