Yesterday I ran the 2nd annual See Jane Run Half Marathon in Seattle and had a great time! The location of the race (Gasworks Park start and finish line, Lake Union loop, run through Fremont and Ballard) couldn’t be beat for a gal living on the east side of the lake.

I decided to run this race last-minute due to an awesome deal I found on Zozi.com. Besides, who doesn’t love chocolates and champagne at the finish line? My race bug and sweet tooth certainly couldn’t resist.

2012 truly marks an amazing running/racing year for me. This was overall my 8th half marathon and my 4th so far of the year. I ran my first full marathon in June and coming up is the Portland Marathon (26.2) as a redemption race in October and the Rock ‘n’ Roll Las Vegas Half Marathon, a nighttime run through the Vegas Strip, in December. So needless to say, I’ve got my feet full.

Now I’m sure some of you might be interested in what I ate leading up to the race. I personally enjoy the food posts.

Joe and I both had considerably busy and tiring weeks this week. I had just finished my official first full week in my new role so was definitely a busy bee. We decided Friday night that having dinner and drinks at Skillet Diner in the Capitol Hill neighborhood of Seattle would help kickstart our weekend. We were right.

If you haven’t ever been to Skillet, you must try! They serve their beverages in mason jars and their food is just downright comforting. I ended up going super cheesy with my meal as I tend not to consume much dairy the night before a race. So cheesy it was. The Ultimate Grilled Cheese is made with three different types of cheese. You have the option of adding their famous bacon jam, but I skipped that in favor of their poutine! If you haven’t had poutine, it’s essentially french fries topped with cheese curds and gravy. Skillet’s version was more of a cheesy sauce, no curds. Still yummy.

I slept with a full belly, content and happy. The next morning before the See Jane Run race expo, Joe and I stopped by our neighborhood cafe, Louisa’s Cafe & Bakery, for iced Americanos and a ham and cheese croissant. The coffee was super refreshing and the croissant was fluffy and decadent. Yum. We ate at the park across the street, happily basking in Seattle sunshine. 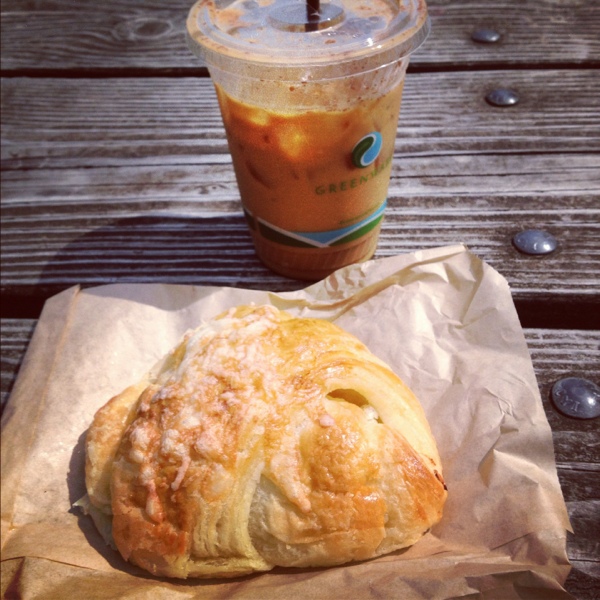 After breakfast I headed over to the race expo located inside the downtown Westin hotel. 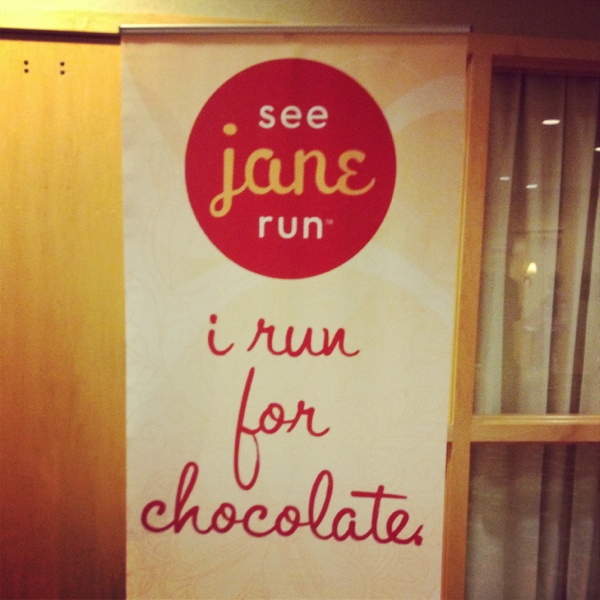 The expo setup was very efficient and small, unlike the Rock ‘n’ Roll expos I’ve attended this year. It was about the size of the Whidbey Island expo, but it was still fun to look around. I ended up purchasing an awesome shirt made for See Jane Run by Oiselle, an awesome women’s running apparel company based in Seattle. One of my besties Becky adores the company! I need to try their Roga shorts, stat. 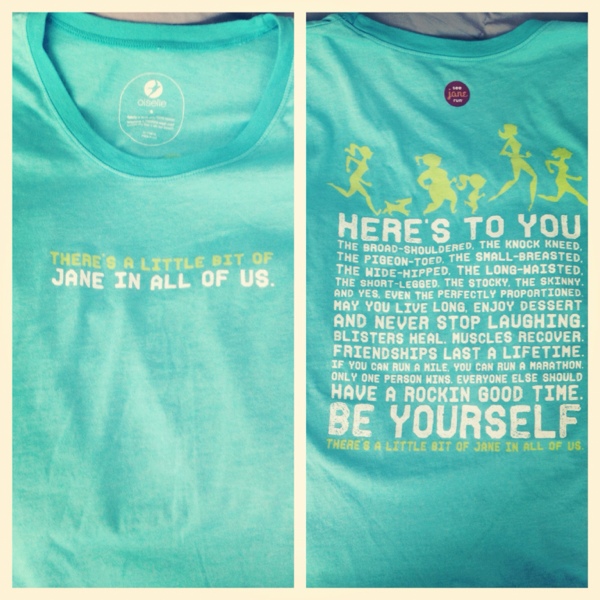 I also ended up with a beautiful red technical race tee — really might be one of my favorites for the feminine fit and color. Also I do run for chocolate, so true. 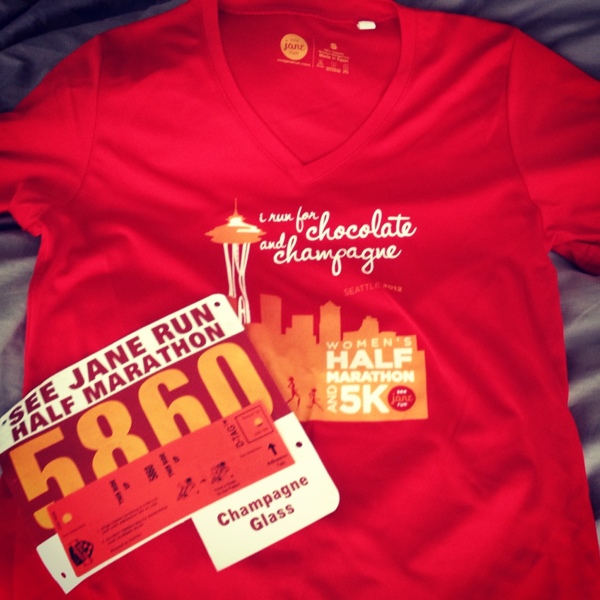 The rest of the afternoon Joe and I took took Lola to the doggy park as she loves running around just as much as her mama. Since she got absolutely dirty from rolling around, we decided to walk her over to the waterside at Magnuson Park. Lola’s swam once as a small puppy, so we were super excited to get her out in the water.

That little pup did so well! She definitely was timid getting out into the water but she persevered and got her tennis ball. It was only when a big dog started bothering her that we decided to head home.

Just my luck, though, I somehow got caught in Lola’s leash as she sprinted forward which ended up lacerating the backs of both knees. It hurt so bad! I was for sure worried about its impact to the race, but after a few hours the pain subsided. Still looked gnarly, though.

For my pre-race carbo-load dinner we went to one of our favorite Italian restaurants, Pasta Bella Ristorante, located Ballard. We started off our dinner with a plate of roasted garlic cloves, which we mashed with olive oil and balsamic vinegar, for the bread. So good!!

For an appetizer we shared their amazing ravioli.

And I had their Pomodoro dish with spaghetti noodles — it seems like my Italian go-to before a race is a Pomodoro pasta as its tomato based and not laden with cream and cheese (though I enjoy both). 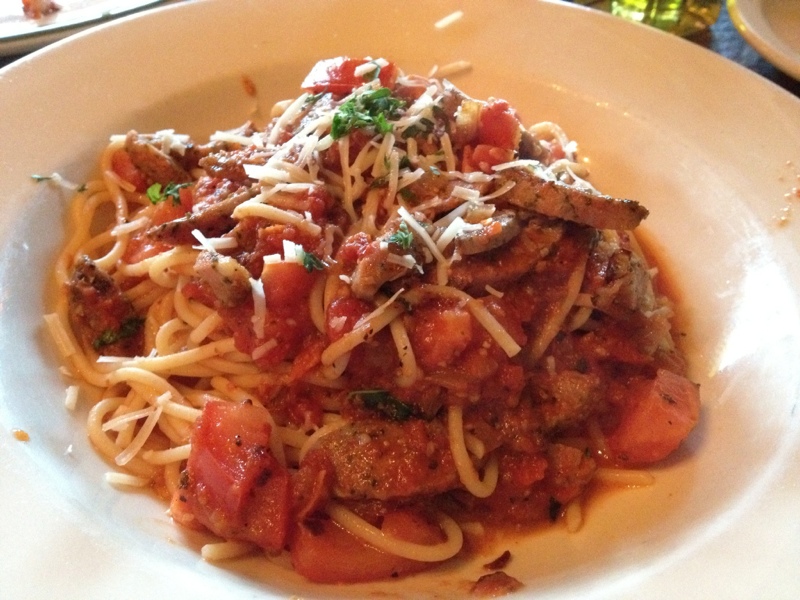 With my tummy full, I easily went to bed by around 11:30pm to get rest up before the race.

At 6am race day, I made myself get up to eat. My standard pre-race breakfast consists of bagel with peanut butter and chia seeds. After grudgingly eating, I went back to bed for another 45 min. The usual getting dressed, pinning the bib, attaching the tracker tag to the shoes, etc. occurred after.

Luckily, the race start was just a 5-minute drive from our house, so my sweet fiancé dropped me off at the start with no problem. 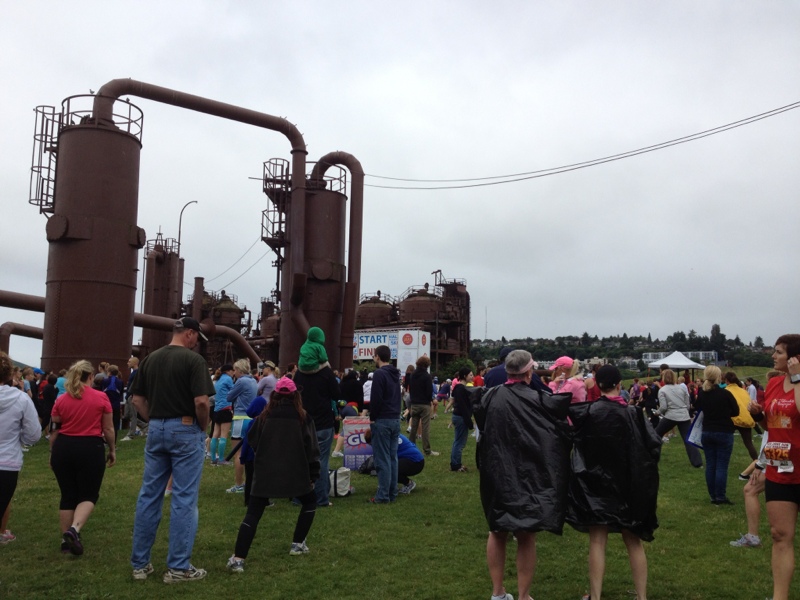 When I arrived at Gasworks Park, there was music blasting, people milling around, and a large crowd of people doing organized warmup exercises with the announcer. While I didn’t participate, I thought the energy was infectious.

I easily made my way over to the start line, with no official corral assignments, and was surprised by how spread out the wave criteria was. First wave was for anyone who runs a 7:59 min/mile or under. My fastest halves have been an 8:05 min/mile. Maybe I should’ve done wave 1?! Wave 2, which I started in, consisted of runners with 8:00 min/mi to like 12:00 min/mile? That’s quite a significant difference. Oh well, not a huge deal as there were no bottlenecks that I could see.

As soon as my wave started, I ran fast across the start line, perhaps a bit too fast, with the first mile well under 8:00 min/mi. It was great to run like the wind, though.

I was a bit concerned about running this race with little preparation leading up to the race, as I had stopped running consistently since the full marathon/injury in early June. I counted after yesterday’s half and had only run six times in total in the last six weeks, one of those runs being the RNR Seattle Half. So yes, very unprepared but luckily my full marathon training base still had me going a bit.

The race itself started in Gasworks Park, ran towards Fremont over the bridge, down to Ballard out-and-back, the entire Lake Union loop, up over the University Bridge, past Gasworks Park to Fremont again, and back. It was a great route in my opinion. The race itself was fairly flat with just a couple of short uphills.

During the race I felt some shin fatigue and was happy that I had decided to take some Tylenol before the race as it started to become painful. At around mile 5 I took a Gu Roctane (caffeinated version of Gu) and felt a boost of energy within a mile. I think I may be a Roctane convert. Mile 9 I took another Gu, espresso love, which I didn’t love.

During the race I wore my trusty Nathan Intensity Hydration Race Vest which saved me! I’ve worn my vest in several races and highly recommend it. This version of the vest is female anatomy-specific, but there’s also one made for guys which Joe has and likes. Hydration is key!!

Towards the last few miles of the race, I was definitely feeling fatigued and wanted to stop so bad. I did stop twice during the race for a total of 20-seconds but no biggie! You have to do what your body tells you. The race itself was also super windy as Seattle has been having crazy lightning-filled weather the past few days. Wind is not a runner’s friend when it comes to running up against, so I employed the drafting technique, running directly behind specific runnes in front of me, making sure that they shielded much of the wind from me. It worked.

The last half mile I gave it my all and I was so happy to see Joe and the pup cheering me on at the 13-mile mark. Finish time: 1:48:29. Only 3-minutes off my PR set just a couple months ago in the midst of marathon training! I am very pleased with this.

My loves came to cheer me on. I’m truly a lucky girl.

As they had promised, I was handed a glass of chocolates. Best post-race ever.

Also filled up with bubbly. Unfortunately, I wasn’t feeling the bubbly after running so I just had a couple sips. 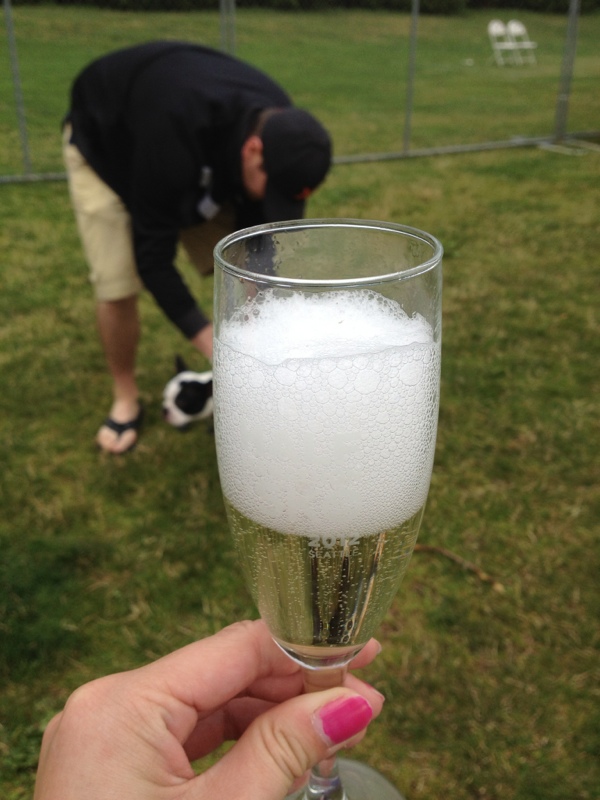 Love that my loves cheer me on!

Also ran into my cousin Gloria who ran the half as well. Awesome job!!

Another race done and another medal on our medal rack. We’re definitely racking up ethos race medals.

All in all, I enjoyed running this race. There were plenty of aid stations, cheering teams, awesome runners, and a great post-race organized area. Plus, again, who doesn’t love chocolates and champagne?! Definitely run this race next year if you want to do one that’s not too much pressure and filled with fun.